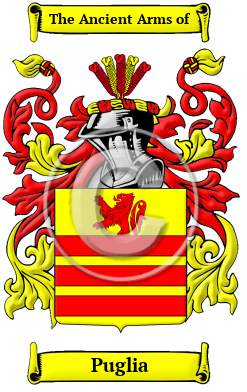 The Puglia surname, though generally associated with the region of Tuscany is said to have derived from the place name Apulia (Italian Puglia) in southeastern Italy, in the region commonly know as the Kingdom of the Two Sicilies. These habitational names, taken on from place names are perhaps the least frequent of the major types of surnames found in Italy. They often bore the prefix "di," which signified emigration from one place to another, and did not necessarily denote nobility.

Early Origins of the Puglia family

The surname Puglia was first found in the city of Florence.

Early History of the Puglia family

This web page shows only a small excerpt of our Puglia research. Another 87 words (6 lines of text) covering the years 1271, 1396, 1600, and 1636 are included under the topic Early Puglia History in all our PDF Extended History products and printed products wherever possible.

More information is included under the topic Early Puglia Notables in all our PDF Extended History products and printed products wherever possible.

Puglia migration to the United States +

Puglia Settlers in United States in the 20th Century