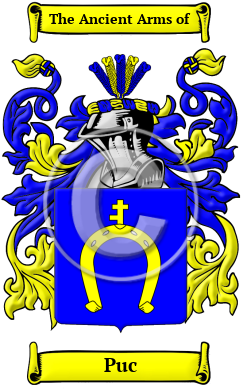 The Polish Puc surname is derived from the word "puch," meaninig "down" or "fluff;" or it may come from the Polish term "puchacz" which literally meaning "an owl."

Early Origins of the Puc family

The surname Puc was first found in Poland, where Puc was borne by members of a sept of the Polish Clan Pobog, as well as by two noble families from the region.

Early History of the Puc family

This web page shows only a small excerpt of our Puc research. Another 63 words (4 lines of text) covering the year 1400 is included under the topic Early Puc History in all our PDF Extended History products and printed products wherever possible.

Spelling variations of this family name include: Puc, Puchala and others.

More information is included under the topic Early Puc Notables in all our PDF Extended History products and printed products wherever possible.

Migration of the Puc family