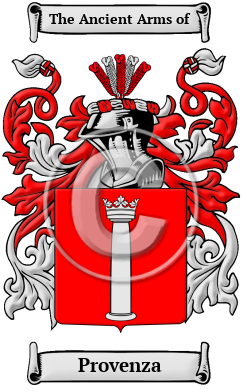 The Provenza surname was used as a name for someone from Provence, southern France.

Early Origins of the Provenza family

The surname Provenza was first found in Tuscany (Italian: Toscana), a region in central Italy, where a Provenzali family, of noble status, lived in the town of Lucca as early as the 13th century.

Early History of the Provenza family

This web page shows only a small excerpt of our Provenza research. More information is included under the topic Early Provenza History in all our PDF Extended History products and printed products wherever possible.

Prominent among members of the family was Marcello Provenzale (1575-1639), Italian painter; as well as Francesco Provenzali, a Sicilian government official, and Councillor to King Filippo II of Spain; Pompeo Provenzali, ambassador to Modena and Vienna, and later, minister to the Grand Duke of Tuscany; Perno Provenzano of Monte San Giuliano, who was...
Another 53 words (4 lines of text) are included under the topic Early Provenza Notables in all our PDF Extended History products and printed products wherever possible.

Provenza migration to the United States +

Provenza Settlers in United States in the 19th Century