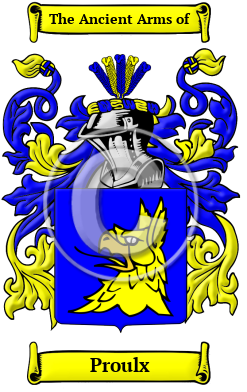 Early Origins of the Proulx family

The surname Proulx was first found in Brittany, where this eminent family was established in ancient times.

The branch Proust produced an abbot of Saint Melaine in 1574, a mayor of Nantes in 1693 and two treasurers in 1725 and in 1766. The branch Prousteau of Montlouis was ennobled in 1817 in Paris. The family also rose in prominence by their important alliances to other distinguished families of the day.

Jean Proulx, born in 1647, son of Jean and Louise (née Vallée), travelled from Nantilly, France to the New World in the 17th century and married Jacquette Fournier, daughter of Guillaume and Françoise (née Hebert), on 5th June 1673.

Jean Prou, born in 1641, travelled from France to Canada in the 17th century. After arriving in Quebec he married Catherine Pinel, daughter of Gilles and Anne, on 2nd November 1676. They remained together in Quebec until Jean's death at Pointe-aux-Trembles on 9th December 1703. [1]

Early History of the Proulx family

This web page shows only a small excerpt of our Proulx research. More information is included under the topic Early Proulx History in all our PDF Extended History products and printed products wherever possible.

French surnames were subject to numerous alterations in spelling because of the various cultural groups that inhabited specific regions. Eventually, each region possessed its own local dialect of the French language. The early development of the French language, however, was also influenced by other languages. For example, Old French was infused with Germanic words and sounds when barbarian tribes invaded and settled in France after the fall of the Roman Empire. Middle French also borrowed heavily from the Italian language during the Renaissance. As a result of these linguistic and cultural influences, the name Proulx is distinguished by a number of regional variations. The many spelling variations of the name include Proulx, Leproulx, Proux, Leproux, Prou, Leprou, Preux, Lepreux, Proust, Leproust, Prousteau, Leprousteau, Prouet and many more.

Another 34 words (2 lines of text) are included under the topic Early Proulx Notables in all our PDF Extended History products and printed products wherever possible.

Proulx migration to the United States +

France was active as a cultural leader in the early 16th century. One particular area in which they lead was the exploration of the New World. The explorers, like Jacques Cartier in 1534, led the way to North America. Champlain, in 1608, made the first of twenty voyages to France to attract settlers and brought the first migrant in 1617. By 1675, there were 7000 French in Quebec, and the French Acadian presence in the Maritimes had reached 500. The French founded Lower Canada, thus becoming one of the two great founding nations of Canada. The family name Proulx has made many distinguished contributions in France and New France to the world of science, culture, religion, and education. Amongst the settlers in North America with this distinguished name Proulx were

Proulx Settlers in United States in the 20th Century