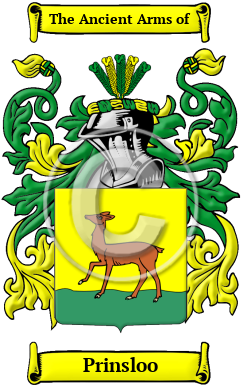 The roots of the distinguished surname Prinsloo lie in Holland. The name is derived from the royal title "prins" and the Middle Dutch "lo(o)," meaning "clearing within a forest;" thus, the term "prinsloo" would most likely denote a clearing within a royal forest. The surname was probably first borne by someone who was employed on royal lands.

Early Origins of the Prinsloo family

The surname Prinsloo was first found in Holland, where the ancestral home of the Prinsloo family is thought to be located. It is likely that the first bearers of the name were employed by the royal family and lived in a forest clearing on the royal lands.

Early History of the Prinsloo family

This web page shows only a small excerpt of our Prinsloo research. Another 151 words (11 lines of text) are included under the topic Early Prinsloo History in all our PDF Extended History products and printed products wherever possible.

Spelling variations of this family name include: Prinsloo, Prinzloo and others.

More information is included under the topic Early Prinsloo Notables in all our PDF Extended History products and printed products wherever possible.

In South Africa, the name Prinsloo is the 188th most popular surname with an estimated 34,413 people with that name. [1]

Migration of the Prinsloo family