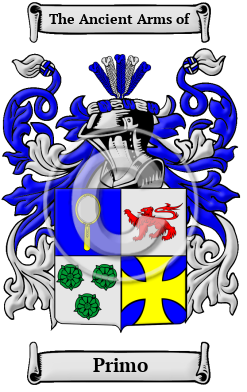 Early Origins of the Primo family

The surname Primo was first found in Burgundy (French: Bourgogne), an administrative and historical region of east-central France, where the family was anciently seated in a village in Côte-d'Or, in the district of Beaune.

The members of the family also branched to other regions, where several of them distinguished themselves through their various accomplishments. The branch Primard was established in a seigniory in Brittany, erected in 1696 for De Limoges. The branch Primont gave its name to Primont, a village in the department of Ariège.

Claude-François-Marie Primat, a prelate, was born in Lyon in 1747. He was ordained a priest at the age of 28. In 1786, he was named parish priest of Saint-Jacques in Douai, in 1802, he was named to the archdiocese in Toulouse, and in 1806, he was named senator and count of the empire. He died in Toulouse in 1816.

Jean Primeau was a sergeant for Mr. Macari and he travelled from La Rochelle, France to Canada in the 17th century. After arriving in the province of Quebec he married Marie Bouchard, daughter of Guillaume and Françoise, at Montreal on 18th November 1686. [1]

Early History of the Primo family

This web page shows only a small excerpt of our Primo research. More information is included under the topic Early Primo History in all our PDF Extended History products and printed products wherever possible.

More information is included under the topic Early Primo Notables in all our PDF Extended History products and printed products wherever possible.

In the United States, the name Primo is the 18,500th most popular surname with an estimated 2,487 people with that name. [2]

Primo migration to the United States +

Primo Settlers in United States in the 19th Century

Primo Settlers in Australia in the 19th Century