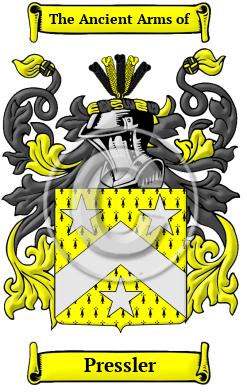 Early Origins of the Pressler family

The surname Pressler was first found in Lancashire at Preesall, with Hackensall, a township, in the chapelry of Stalmine, parish of Lancaster, union of Garstang, hundred of Amounderness. " 'Pressonede' in the Domesday Survey was estimated at six carucates of land: the tithes were granted by Roger de Poictou to the priory of Lancaster." [1] Hence, conjecturally, the surname is descended from the tenant of the lands of Preesall, held by a steward of the King who was recorded in the Domesday Book census of 1086. Literally, the place name means "brushwood headland" from the Old Welsh word "pres" + the Old Viking word "hofuth" or the Old English word "heafod." [2] Preshaw is a locality near Upham on the slopes of the South Downs.

Early History of the Pressler family

This web page shows only a small excerpt of our Pressler research. Another 61 words (4 lines of text) are included under the topic Early Pressler History in all our PDF Extended History products and printed products wherever possible.

More information is included under the topic Early Pressler Notables in all our PDF Extended History products and printed products wherever possible.

In the United States, the name Pressler is the 12,542nd most popular surname with an estimated 2,487 people with that name. [3]

Pressler migration to the United States +

Pressler Settlers in United States in the 19th Century