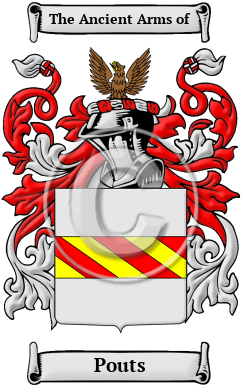 Early Origins of the Pouts family

The surname Pouts was first found in Pons in Saintonge. " The Lords of Pons in Acquitaine were one of the most powerful families in France, and are frequently mentioned in history. Pontius or Pons, who in 1079 granted a church to the Abbey of Cormery (Gall. Christ. xii. 14) had four younger sons who went to England, of whom Drogo Fitz-Ponce and Walter Fitz-Ponce held important baronies in 1086 [1]

Early History of the Pouts family

This web page shows only a small excerpt of our Pouts research. Another 190 words (14 lines of text) covering the years 1067, 1356 and 1741 are included under the topic Early Pouts History in all our PDF Extended History products and printed products wherever possible.

More information is included under the topic Early Pouts Notables in all our PDF Extended History products and printed products wherever possible.

Pouts migration to the United States +

Pouts Settlers in United States in the 19th Century