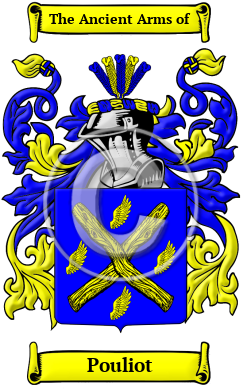 During that dark period of history known as the Middle Ages, the name of Pouliot was first used in France. While the patronymic and metronymic surnames, which are derived from the name of the father and mother respectively, are the most common form of a hereditary surname in France, occupational surnames also emerged during the late Middle Ages. Many people, such as the Pouliot family, adopted the name of their occupation as their surname. However, an occupational name did not become a hereditary surname until the office or type of employment became hereditary. The surname Pouliot was an occupational name for a poultry farmer. Originally the name Pouliot was derived from the Old French word poulet, meaning chicken.

Early Origins of the Pouliot family

The surname Pouliot was first found in Burgundy (French: Bourgogne), an administrative and historical region of east-central France, where the family was established in the village of Beaujolais, in the diocese of Langres.

Early History of the Pouliot family

This web page shows only a small excerpt of our Pouliot research. Another 110 words (8 lines of text) covering the years 1356, 1500, 1560, 1607, and 1699 are included under the topic Early Pouliot History in all our PDF Extended History products and printed products wherever possible.

Notable amongst the family at this time was Geoffroy Poulard, Franco-Breton Squire who bravely fought but was killed at the Combat of the Thirty on March 26th, 1351; and Pierrard Poullet, a writer at the end of the 16th century. John Poulett (1586-1649), 1st Baron Poulett, was a cavalier...
Another 47 words (3 lines of text) are included under the topic Early Pouliot Notables in all our PDF Extended History products and printed products wherever possible.

Pouliot migration to the United States +

Pouliot Settlers in United States in the 20th Century

Pouliot Settlers in Canada in the 17th Century

Pouliot Settlers in Canada in the 18th Century

Pouliot Settlers in Canada in the 20th Century