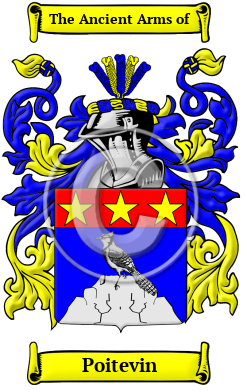 Early Origins of the Poitevin family

The surname Poitevin was first found in Poitou, where Poitevin (Poetevin) is a regional language spoken in that area that dates back to at least the 13th century when it appeared in charters and legal documents at that time. People who spoke the languages were known as the Poitevins.

Early History of the Poitevin family

This web page shows only a small excerpt of our Poitevin research. Another 144 words (10 lines of text) covering the year 1822 is included under the topic Early Poitevin History in all our PDF Extended History products and printed products wherever possible.

More information is included under the topic Early Poitevin Notables in all our PDF Extended History products and printed products wherever possible.

Poitevin migration to the United States +

Poitevin Settlers in United States in the 18th Century

Poitevin Settlers in Canada in the 17th Century

Poitevin Settlers in Canada in the 18th Century