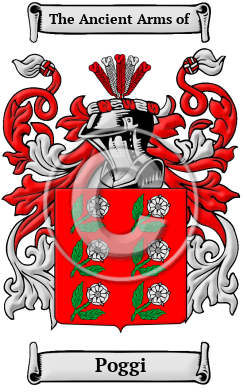 Early Origins of the Poggi family

Early History of the Poggi family

This web page shows only a small excerpt of our Poggi research. Another 102 words (7 lines of text) covering the years 1380, 1459, 1402, 1403 and 1911 are included under the topic Early Poggi History in all our PDF Extended History products and printed products wherever possible.

Spelling variations of this family name include: Poggio, Poggi, Pogio and others.

Prominent among bearers of this surname in early times was Gian Francesco Poggio Bracciolini, (1380-1459), Italian scholar of the Renaissance, born at Terranuova, a village in the territory of Florence. He studied Latin under John of Ravenna, and Greek under Manuel Chrysoloras. His distinguished abilities and his dexterity as a copyist of MSS. brought him into early notice with the...
Another 60 words (4 lines of text) are included under the topic Early Poggi Notables in all our PDF Extended History products and printed products wherever possible.

Poggi migration to the United States +

Poggi Settlers in United States in the 19th Century

Historic Events for the Poggi family +