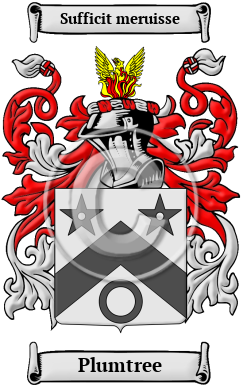 The name Plumtree comes from in Nottinghamshire having derived from the Old English word plume, meaning plum and indicates that its original bearer lived near a plum tree.

Early Origins of the Plumtree family

The surname Plumtree was first found in Nottinghamshire where they were Lords of the Manor of Plumtre in that shire. The was a family of FitzWilliams of Plumtre that conjecturally may have been descended from the natural son of William, Duke of Normandy.

Early History of the Plumtree family

Huguenot surnames were only slightly Anglicized, and they remain to this day a distinct group of surnames in England. Nevertheless, Huguenot surnames have been subject to numerous spelling alterations since the names emerged in France. French surnames have a variety of spelling variations because the French language has changed drastically over the centuries. French was developed from the vernacular Latin of the Roman Empire. It is divided into three historic and linguistic periods: Old French, which developed before the 14th century; Middle French, which was used between the 14th and 16th centuries; and Modern French, which was used after the 16th century and continues to be in use today. In all of these periods, the French language was heavily influenced by other languages. For example, Old French was infused with Germanic words and sounds when the barbarian tribes invaded and settled in France after the fall of the Roman Empire. Middle French also borrowed heavily from the Italian language during the Renaissance. Huguenot names have numerous variations. The name may be spelled Plumtree, Plumbtre, Plumbtree, Plumtre, Plomtre and many more.

Another 49 words (4 lines of text) are included under the topic Early Plumtree Notables in all our PDF Extended History products and printed products wherever possible.

Plumtree migration to the United States +

An inquiry into the early roots of North American families reveals a number of immigrants bearing the name Plumtree or a variant listed above:

Plumtree Settlers in United States in the 17th Century

Plumtree Settlers in United States in the 18th Century

Plumtree Settlers in Australia in the 19th Century

Motto: Sufficit meruisse
Motto Translation: It is enough to have deserved well.