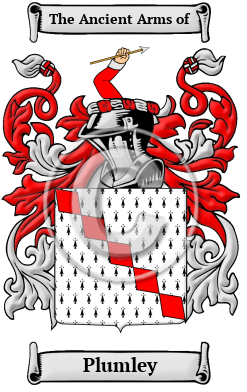 Early Origins of the Plumley family

The surname Plumley was first found in Cheshire (now Cheshire East) at Plumley, a village and civil parish that dates back to 1119 when it was listed as Plumleia and literally meant "plum-tree wood or clearing," from the Old English words "plume" + "leah." [1] As far as the surname is concerned, it was first referenced in the year 1235 when Alexander Plomley held estates in Derbyshire.

Early History of the Plumley family

Spelling variations of this family name include: Plumley, Plumbley, Plumbleigh, Plomley, Plombley and many more.

More information is included under the topic Early Plumley Notables in all our PDF Extended History products and printed products wherever possible.

In the United States, the name Plumley is the 6,298th most popular surname with an estimated 4,974 people with that name. [2]

Plumley migration to the United States +

Plumley Settlers in United States in the 17th Century

Plumley Settlers in United States in the 19th Century

Plumley Settlers in United States in the 20th Century

Plumley Settlers in Australia in the 19th Century

Plumley Settlers in New Zealand in the 19th Century

Historic Events for the Plumley family +