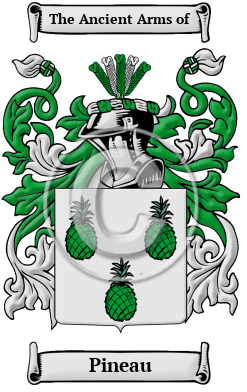 Early Origins of the Pineau family

The surname Pineau was first found in La Rochelle, where one of the first records of the name was Hélie Pineau who was listed there in 1394.

Several families of the name were found in the region of Fontenay-le Comte and La Chitaigneraie and seem to come from the same stock. At the end of the 15th century, we find Jean Pineau du Breuil-Barret, husband of Sainte de Sallenove.

Early History of the Pineau family

Spelling variations of this family name include: Pineau, Pinau, Pinaud, Pinel, Pinault, Pineault and others.

Notable amongst the family at this time was Pierre Paul Antoine Pineau, Marquis de Viennay. The branch from Maillezais produced the distinguished physician Etienne-Gabriel-Hilaire Pineau (1736-1807), who had his moment of fame and published a Memoir on the danger of hasty burials; he had the honor of presenting his work to King Louis XVI and Queen Marie-Antoinette, who welcomed him with distinction. Jacques Pineau de Viennay (b. 1709) was the Intendent of Strassbourg from 1752-1764. Other early entries for the...
Another 78 words (6 lines of text) are included under the topic Early Pineau Notables in all our PDF Extended History products and printed products wherever possible.

In France, the name Pineau is the 311st most popular surname with an estimated 12,999 people with that name. [1]

Pineau migration to the United States +

Pineau Settlers in United States in the 19th Century

Pineau Settlers in Canada in the 17th Century

Pineau Settlers in Canada in the 18th Century