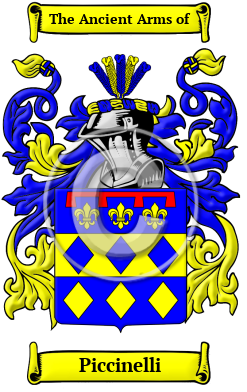 The surname Piccinelli is derived from the Italian word "piccino," which means "small."

Early Origins of the Piccinelli family

The surname Piccinelli was first found in 1314 with Marco Picinini, the first of a long line of Picinini Senators.

Early History of the Piccinelli family

This web page shows only a small excerpt of our Piccinelli research. More information is included under the topic Early Piccinelli History in all our PDF Extended History products and printed products wherever possible.

Surnames that originated in Italy are characterized by an enormous number of spelling variations. Some of these are derived from regional traditions and dialects. Northern names, for instance, often end in "o", while southern names tend to end in "i". Other variations come from the fact the medieval scribes tended to spell according to the sound of words, rather than any particular set of rules. The recorded variations of Piccinelli include Piccini, Piccin, Piccinni, Piccinno, Piccioli, Picciolo, Piccioni, Picciocchi, Piccitto, Picciallo, Picciulli, Picciullo, Picciuzzo, Pizzini, Pizzin, Pizzoli, Pizzolo, Pizzioli, Pizziolo, Pizziol, Piccinelli, Piccinini, Piccinino, Piccinin, Piccinato, Pizzinelli, Pizzinini, Pizzolotto and many more.

Prominent among members of the family was Nicol Piccinino, a mercenary captain born in 1386 in Perugia. In order to make peace with the troops of Francesco Sforza, Piccinino allowed his daughter to marry Sforza. Nevertheless, his troops were overcome by those of Sforza in 1444 and Nicol was so grief stricken that he died not long afterward. He was buried in the Milan Cathedral. Jacopo Piccinino was a 15th century mercenary captain from Naples. Giovanni Piccioni was an organist and composer of masses, madrigals and motets during the next century. Also at this time was...
Another 95 words (7 lines of text) are included under the topic Early Piccinelli Notables in all our PDF Extended History products and printed products wherever possible.

Migration of the Piccinelli family