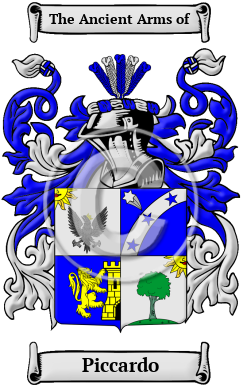 The name Piccardo is taken from Picardy, a region in Northern France; it would have been given to a man who came to Italy from Picardy, which explains the higher concentration of the name in the north; France is north-west of Italy; so Tuscany would be one of the first places in Italy that someone coming from France would pass through, especially if they were coming by sea to avoid crossing the mountains.The spelling variations that end with "o" are mostly from the south of Italy, whereas names that end in "i" are mostly from the north.

Early Origins of the Piccardo family

The surname Piccardo was first found in Tuscany (Italian: Toscana), a region in central Italy. Bearers of this surname have been found in nearly every part of Italy, though the family seems to be concentrated in Tuscany and there are more of them in the north than the south.

Early History of the Piccardo family

This web page shows only a small excerpt of our Piccardo research. Another 30 words (2 lines of text) are included under the topic Early Piccardo History in all our PDF Extended History products and printed products wherever possible.

More information is included under the topic Early Piccardo Notables in all our PDF Extended History products and printed products wherever possible.

Migration of the Piccardo family