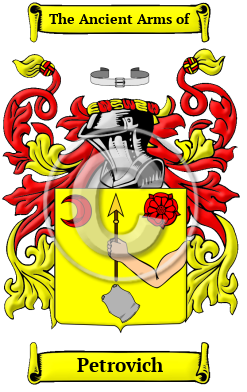 The Petrovich surname comes from the Russian version of the given name Peter. The name was probably first derived from the Greek "petros," meaning "rock." This name was extremely popular throughout Christian Europe, due to St. Peter. Petrovich, or any variants of this name ending in "ov/ev" were Patronymic surnames, meaning "son of Peter," created by adding the suffix to the personal name.

Early Origins of the Petrovich family

The surname Petrovich was first found in Russia, where the name originated in early times.

Early History of the Petrovich family

More information is included under the topic Early Petrovich Notables in all our PDF Extended History products and printed products wherever possible.

Migration of the Petrovich family

Some of the first settlers of this family name or some of its variants were: P. Petrovits, who arrived in San Francisco, California in 1851; and Anton Petrinovich, who arrived in New York city in 1871.

Historic Events for the Petrovich family +