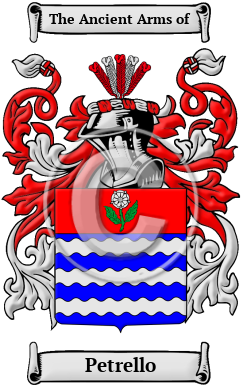 Hereditary family names gradually came into usage in Italy beginning in the 10th and 11th centuries. Italian hereditary surnames were developed according to fairly general principles and they were characterized by a profusion of derivatives coined from given names. The surname Petrello came from the personal name Pietro, which is itself from the Latin "Petrus," and the Greek "Petros," meaning "rock."

Early Origins of the Petrello family

The surname Petrello was first found in throughout Italy, although they most frequently appear in the southern Italian regions of Puglia and Sicily. One line of Petroni di Siena were on record from the 13th century.

Early History of the Petrello family

This web page shows only a small excerpt of our Petrello research. More information is included under the topic Early Petrello History in all our PDF Extended History products and printed products wherever possible.

Prominent among members of the family was Riccardo Petroni, a Cardinal in Siena in 1313; Cola Petruccioli, a painter in Perugia in 1401 whose works can be seen at the Cathedral...
Another 30 words (2 lines of text) are included under the topic Early Petrello Notables in all our PDF Extended History products and printed products wherever possible.

Migration of the Petrello family

Some of the first settlers of this family name or some of its variants were: Florindo Petroni, who settled in California in 1888; Frank Petrella, who came to New York sometime between 1884 and 1925; Francisco Petrenella of Calvello, Italy, who arrived at Ellis Island on Nov 8, 1900 aboard the &quot.