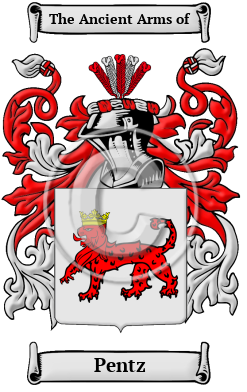 The distinguished German surname Pentz is derived from "Pentz," the name of a city located in the Baltic territory of Pomerania. This sort of toponymic surname developed when an individual migrated from one settled area to another, where his new neighbors would often be inclined to refer to him in terms of his place of origin.

Early Origins of the Pentz family

The surname Pentz was first found in Pomerania, where it originated. It is likely that the progenitor of the name was a native of the city of Pentz who had moved to another city, and was therefore referred to by the name of his hometown.

Early History of the Pentz family

This web page shows only a small excerpt of our Pentz research. Another 61 words (4 lines of text) covering the years 1634, 1726, 1734, and 1841 are included under the topic Early Pentz History in all our PDF Extended History products and printed products wherever possible.

Spelling variations of this family name include: Pentz, Penz, von Pentz and others.

Another 35 words (2 lines of text) are included under the topic Early Pentz Notables in all our PDF Extended History products and printed products wherever possible.

Pentz migration to the United States +

Pentz Settlers in United States in the 18th Century

Pentz Settlers in United States in the 19th Century