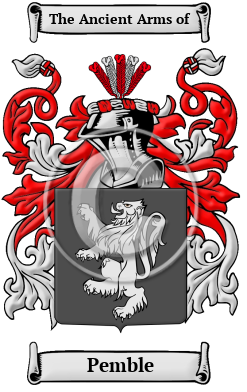 The surname is most likely a habitation name derived from the place named Pendle Forest, Lancashire. The trials of the Pendle witches in 1612 are among the most famous witch trials in English history. All lived in or near Pendle Hill, Lancashire and were charged with murdering ten people.

Early Origins of the Pemble family

The surname Pemble was first found in Hertfordshire at Pendley, a rarely referenced village near Tring. The village dates back to about the 4th century and is home to Pendley Manor which dates back to about the same time. According to legend, the ancient manor was ceased by William the Conqueror and passed to his brother in law, Robert, Earl of Moretain.

From that early reference, it passed through many hands having many restorations to become a hotel and conference center today. As far as the surname is concerned, one of the first listings of the ancient name was in Leicester where Richard Pendorayl was first listed in the year 1253 on the list of Seals given to the Knights of Leicester.

Early History of the Pemble family

Spelling variations of this family name include: Pendle, Penthill, Penderell, Pemble and others.

Distinguished members of the family include William Pemble (1591-1623), an English theologian and author from Egerton, Kent. His father was poor, and his education was provided for by John Barker of Mayfield, Sussex. "His acquirements in various branches of learning were very remarkable. It would seem that his labours and studies exhausted his strength and shortened his days." [1] He died at the age of 32. Richard Penderel (d. 1672) was one of five brothers who were primarily instrumental in the escape of Charles II after the battle of Worcester in 1651. He was born on the Shropshire border of Staffordshire. "While spurring...
Another 178 words (13 lines of text) are included under the topic Early Pemble Notables in all our PDF Extended History products and printed products wherever possible.

Pemble migration to the United States +

Pemble Settlers in United States in the 20th Century