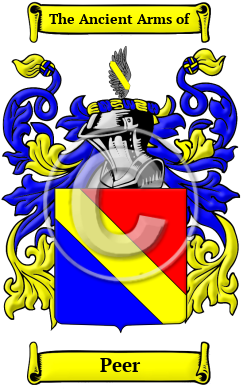 Early Origins of the Peer family

The surname Peer was first found in the Palatinate, where the name emerged in mediaeval times as one of the notable families of the region. From the 13th century the surname was identified with the great social and economic evolution which made this territory a landmark contributor to the development of the nation.

Early History of the Peer family

Notables with the name Peer during this period were Catharina Peeters (1615-1676), Flemish Baroque painter noted for painting seascapes; Johannes (or Jan) Peeters (1624-1677), a Flemish Baroque painter who specialized in seascapes and shipwrecks; Bonaventura Peeters the Elder (1614-1652), a Flemish painter, draughtsman and etcher; John Peeters or Pieters (1667-1727), born in Antwerp, Belgium, a Belgium painter related to Bonaventura Peeters who emigrated to England, nicknamed "Doctor Peeters" for his restoration of damaged pictures and drawings. Carl Friedrich...
Another 76 words (5 lines of text) are included under the topic Early Peer Notables in all our PDF Extended History products and printed products wherever possible.

In the United States, the name Peer is the 8,895th most popular surname with an estimated 2,487 people with that name. [1]

Peer migration to the United States +

Peer Settlers in United States in the 17th Century

Peer Settlers in United States in the 18th Century

Peer Settlers in United States in the 19th Century

Peer Settlers in New Zealand in the 19th Century