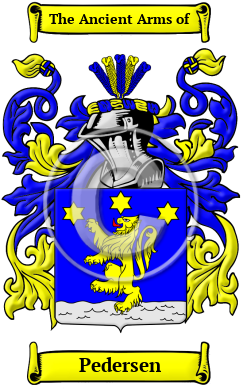 The surname Pedersen is patronymic, meaning "son of Peter." Peter is a name which comes from the Greek word petros, meaning "rock" or "stone." Jesus Christ bestowed the name on his apostle Simon, saying "Thou art Peter and upon this rock I will build my Church" and like all Biblical names, Peter became one of the most popular personal names in Christian Europe.

Spelling variations of this family name include: Pedersen, Peterssen, Pederssen and others.

Pedersen migration to the United States +

Pedersen Settlers in United States in the 19th Century

Pedersen Settlers in United States in the 20th Century

Pedersen Settlers in New Zealand in the 19th Century

Historic Events for the Pedersen family +