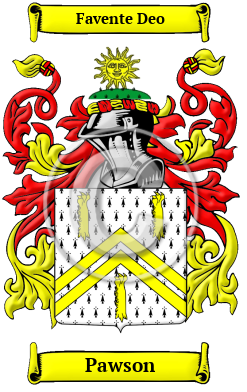 Early Origins of the Pawson family

The surname Pawson was first found in Yorkshire. The township of Shawdon in Northumberland was home to an early branch of the family. "The township is intersected by the road from Morpeth to Wooler, and comprises about 1200 acres of land, mostly arable, the property of William Pawson, Esq., whose mansion here is surrounded with excellent wood." [1]

Early History of the Pawson family

This web page shows only a small excerpt of our Pawson research. Another 88 words (6 lines of text) covering the years 1614 and 1675 are included under the topic Early Pawson History in all our PDF Extended History products and printed products wherever possible.

Spelling variations of this family name include: Pawson, Payson and others.

Another 32 words (2 lines of text) are included under the topic Early Pawson Notables in all our PDF Extended History products and printed products wherever possible.

Pawson migration to the United States +

Pawson Settlers in United States in the 17th Century

Pawson Settlers in United States in the 19th Century

Pawson Settlers in Australia in the 19th Century

Pawson Settlers in New Zealand in the 19th Century