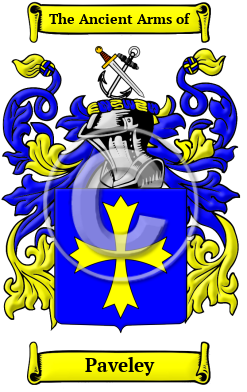 Early Origins of the Paveley family

The surname Paveley was first found in Northamptonshire. One of the first records of the family was Sir Walter Paveley (1319-1375), soldier, son of Walter de Paveley. "Several families of the name of Paveley occur as holding lands in Northamptonshire, Kent, Somerset, and Wiltshire, during the thirteenth and fourteenth centuries. The family to which Walter belonged seems to have been connected with the two former counties. During the reign of Edward II the heads both of the Wiltshire and Kentish families were called Walter." [1]

His father, the aforementioned Walter de Pavely of Northamptonshire sided with Thomas of Lancaster, and was taken prisoner at Boroughbridge in 1322. He was later released and became Member of Parliament for Kent in 1324 as he had acquired lands in Kent through marriage.

Early History of the Paveley family

This web page shows only a small excerpt of our Paveley research. Another 79 words (6 lines of text) covering the years 1235, 1455 and 1487 are included under the topic Early Paveley History in all our PDF Extended History products and printed products wherever possible.

More information is included under the topic Early Paveley Notables in all our PDF Extended History products and printed products wherever possible.

Migration of the Paveley family