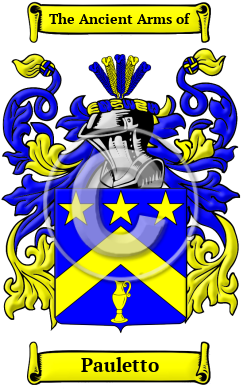 The surname Pauletto comes from the personal name Paolo, the Italian equivalent of Paul. The popularity of this name was originally due to the fact that during the Christian era, people often named their children after saints and biblical figures.

Early Origins of the Pauletto family

The surname Pauletto was first found in the port city of Genoa. Early records list the physician Gherardo de Paolo, as "one of the 12 wisest men in Genoa in 1315."

Early History of the Pauletto family

This web page shows only a small excerpt of our Pauletto research. Another 24 words (2 lines of text) covering the years 1798, 1837, 1419, 1603, 1681, 1642 and 1720 are included under the topic Early Pauletto History in all our PDF Extended History products and printed products wherever possible.

Prominent among members of the family was Paolo da Firenze (d. 1419), Italian composer, theorist, and monk, a member of the Camaldolese order; Aretino Paolo, a 16th century church musician, composer, and choirmaster of the Arezzo Cathedral; Pietro Paolini (1603-1681), an Italian painter of the Baroque period...
Another 47 words (3 lines of text) are included under the topic Early Pauletto Notables in all our PDF Extended History products and printed products wherever possible.

Migration of the Pauletto family