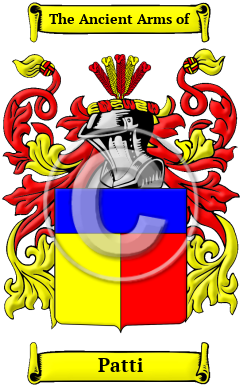 Early Origins of the Patti family

The surname Patti was first found in Messina (Sicilian: Missina; Latin: Messana), capital of the Italian province of Messina, on the Strait of Messina, the channel separating Sicily from mainland Italy. Messina is an ancient city, having been founded in the late 8th cent. B.C. by Greek colonists.

Early History of the Patti family

This web page shows only a small excerpt of our Patti research. Another 128 words (9 lines of text) covering the years 1250, 1300, and 1492 are included under the topic Early Patti History in all our PDF Extended History products and printed products wherever possible.

Spelling variations of this family name include: Patti, Pati, Pattia and others.

Prominent among bearers of this surname in early times was Ansaldo Patti, who encouraged the arrival of the Normans in Sicily: he was one of the three persons designated as ambassadors of Messina to urge Count Ruggiero of Calabria to liberate Sicily from the Moors. Lucio Patti, considered a brave warrior, conquered the cities of Girgenti and...
Another 56 words (4 lines of text) are included under the topic Early Patti Notables in all our PDF Extended History products and printed products wherever possible.

In the United States, the name Patti is the 12,357th most popular surname with an estimated 2,487 people with that name. [1]

Patti migration to the United States +

Patti Settlers in United States in the 20th Century