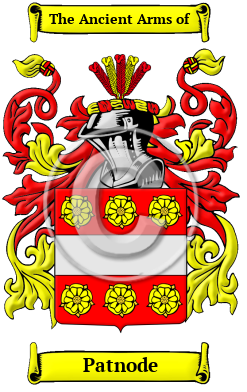 The French surname Patnode is of occupational origin, deriving from the trade or activity of the initial bearer. In this instance, the name is derived from the word "patena', meaning "sacred disc,) in the form of a small plate that serves to cover the chalice and to receive the Sacred Host. Therefore, the progenitor of the surname Patnode was someone who used this device for religious purposes.

Early Origins of the Patnode family

The surname Patnode was first found in the region of Champagne, in the southern department of Haute-Marne.

Early History of the Patnode family

This web page shows only a small excerpt of our Patnode research. Another 76 words (5 lines of text) covering the years 1423, 1845 and 1871 are included under the topic Early Patnode History in all our PDF Extended History products and printed products wherever possible.

Another 36 words (3 lines of text) are included under the topic Early Patnode Notables in all our PDF Extended History products and printed products wherever possible.

In the United States, the name Patnode is the 8,897th most popular surname with an estimated 2,487 people with that name. [1]

Patnode migration to the United States +

Patnode Settlers in United States in the 20th Century