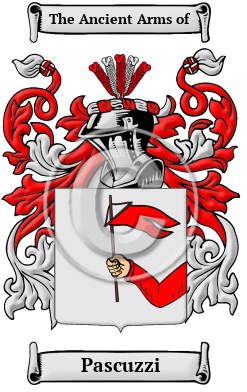 The Pascuzzi surname is derived from the Italian word "pasqua," which means "Easter," the Christian holiday that celebrates the resurrection of Christ. As a surname, Pascuzzi was most likely originally a nickname for a person who was born on Easter day. The word "pasqua" is derived from the ecclesiastical Latin word "Pascha," which in turn comes from the Greek "Pascha" and the Hebrew "Pesah" (through the Aramaic "Pisha"). Pesah was the holiday which celebrated the liberation of the people of Israel from the slavery in Egypt and coincided with the Christian holiday.

Early Origins of the Pascuzzi family

The surname Pascuzzi was first found in the area of Venice, although branches of this surname are found in Genoa, Naples, Sicily, Ferrara, Florence, Bologna and Siena.

Early History of the Pascuzzi family

This web page shows only a small excerpt of our Pascuzzi research. Another 139 words (10 lines of text) covering the years 1120, 1559, 1599, and 1616 are included under the topic Early Pascuzzi History in all our PDF Extended History products and printed products wherever possible.

More information is included under the topic Early Pascuzzi Notables in all our PDF Extended History products and printed products wherever possible.

Pascuzzi migration to the United States +

Pascuzzi Settlers in United States in the 19th Century

Pascuzzi Settlers in United States in the 20th Century