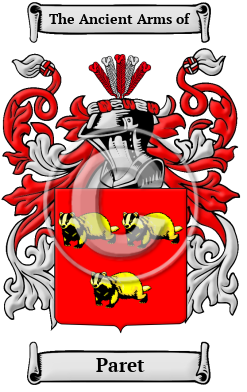 The Paret surname is derived from the French word, "paré", which is the past participle of the verb, "parer", meaning, "to prepare", therefore the name was originally occupational, for someone who finished cloth.

Early Origins of the Paret family

The surname Paret was first found in Auvergne, a historic province in south central France where the family was established in early times in the department of Puy-de-Dôme.

Several members if this family distinguished themselves. Ambroise Paré was a surgeon, who was born in Laval around the beginning of the 16th century, and who died in Paris, in 1590. He was called the "barber of the kings" - Henry II, François II and Charles IX, and he was known as the restorer of surgery in France. He wrote "Les Préceptes Chirurgicaux", a work of 28 volumes.

Early History of the Paret family

This web page shows only a small excerpt of our Paret research. Another 44 words (3 lines of text) covering the years 1510 and 1590 are included under the topic Early Paret History in all our PDF Extended History products and printed products wherever possible.

Another 33 words (2 lines of text) are included under the topic Early Paret Notables in all our PDF Extended History products and printed products wherever possible.

Paret migration to the United States +

Paret Settlers in United States in the 17th Century