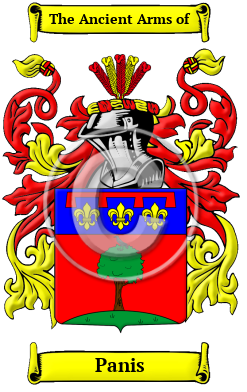 Venice, one of the oldest and most beautiful regions of Italy, is the esteemed birthplace of numerous prominent families, and of a family that bears the surname Panis. Although people were originally known only by a single name, it became necessary for them to adopt a second name to identify themselves, as populations grew and travel became more frequent. The process of adopting fixed hereditary surnames was not complete until the modern era, but the use of hereditary family names in Italy began in the 10th and 11th centuries. Panis was a surname derived from an occupation. Occupational surnames, which are less common than other types of surnames in Italy, date back to the feudal era. The surname Panis is an occupational name for a a baker, or someone who sold bread having been derived from the Italian word "pane," which means "bread" and from the Latin "panis," with the root of the meaning being derived from the verb "to feed or nourish."

Early Origins of the Panis family

The surname Panis was first found in Bolgna (Latin: Bononia), the largest city and the capital of Emilia-Romagna Region. Earliest records are found with the famous and powerful Panico family, with Count Alberto in 1068.

Early History of the Panis family

This web page shows only a small excerpt of our Panis research. More information is included under the topic Early Panis History in all our PDF Extended History products and printed products wherever possible.

There are many variations of most of those Italian names that originated in the medieval era. Some of these come from regional differences, like the tradition of ending northern names in "o" and southern names in "i". Others come from inaccuracies in the recording process, which were extremely common in the eras before dictionaries standardized spelling. Some of the spelling variations of Panis are Pane, Pani, Lo Pane, Lopane, Panelli, Panello, Panella, Panetti, Panetta, Panozzo, Panacci, Paniccia, Panizza, Pannain, Panormo, Pandone, Panizzi, Paniza, Panizzoni, Panini, Pannini, Panici, Panico and many more.

Prominent among members of the family was Ugolino Panico, Lord of over 20 territories during the 13th century; Porcelio Pandone, a humanist in Naples in 1405; Franceschino and Francesco Panizzoni were famous doctors in Florence during the 15th century; Francesco Panizzoni was mayor of Candia di Lomellina in 1487; Marsiglio Panizzoni was mayor of Piacenza in 1400; Giambattista Pannini was a Count, was Duke of Mantua, as well as a...
Another 69 words (5 lines of text) are included under the topic Early Panis Notables in all our PDF Extended History products and printed products wherever possible.

Migration of the Panis family

An inquiry into the early roots of North American families reveals a number of immigrants bearing the name Panis or a variant listed above: Filomena Panni, of Saccurelle, who arrived in New York on September 13, 1892, aboard the Neustria; Domenico Pannicelli, who arrived in America on March 22, 1883.