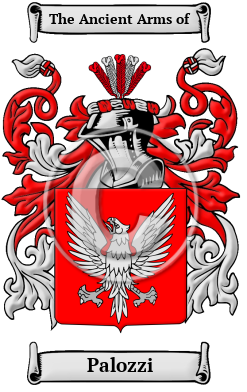 The Palozzi surname is the patronymic or plural form of Palazzo; which is a habitational name, created a place name such as Palazzo Adriano in Palermo province, Sicily; Palazzo San Gervasio in Potenza province; or possibly from Palazzo Canavese in Turin province. These place names are all rooted in the Italizn word "palazzo," which means "palace."

Early Origins of the Palozzi family

The surname Palozzi was first found in Milan (Italian: Milano, Milanese: Milan), the second-most populous city in Italy and the capital of Lombardy. The two palaces in the Piazza del Duomo, Palazzo Reale and the palace of the archbishops are notable. The city is rich in art, museums, galleries and sights. Castello Sforzesco stands in the Parco. In those ancient times only persons of rank, the podesta, clergy, city officials, army officers, artists, landowners were entered into the records. To be recorded at this time, at the beginning of recorded history, was of itself a great distinction and indicative of noble ancestry. The family are recorded in Milano in 1277.

Early History of the Palozzi family

This web page shows only a small excerpt of our Palozzi research. Another 125 words (9 lines of text) covering the years 1212, 1279, 1288, and 1462 are included under the topic Early Palozzi History in all our PDF Extended History products and printed products wherever possible.

Prominent among bearers of this family in early times was Corrado Palazzi, Captain of the Brescia militia during the battle with Trent in 1279, of the Ghibeline faction, he became mayor of Piacenza in 1288...
Another 34 words (2 lines of text) are included under the topic Early Palozzi Notables in all our PDF Extended History products and printed products wherever possible.

Migration of the Palozzi family