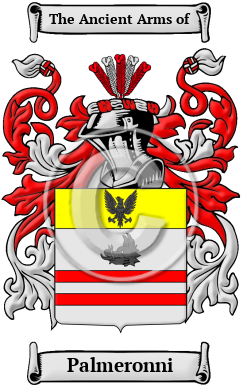 Venice, one of the oldest and most beautiful regions of Italy, is the esteemed birthplace of numerous prominent families, and of a family that bears the surname Palmeronni. Although people were originally known only by a single name, it became necessary for them to adopt a second name to identify themselves, as populations grew and travel became more frequent. The process of adopting fixed hereditary surnames was not complete until the modern era, but the use of hereditary family names in Italy began in the 10th and 11th centuries. Palmeronni was a surname derived from an occupation. Occupational surnames, which are less common than other types of surnames in Italy, date back to the feudal era. The surname Palmeronni is an occupational name for a person who carries palm branches in processions. The surname Palmeronni is a common occupational name for a pilgrim or cleric who frequently a carried a palm branch. The surname Palmeronni is derived from the Old French word "palmier," which meant "cleric" in Medieval times.

Early Origins of the Palmeronni family

The surname Palmeronni was first found in Piedmont, Umbria, Pisa, Bologna, Florence, Naples, and Siena. one of the first on record was Benedetto Palmieri, a Norman Baron who helped conquest Sicily with his 80 knights. After the victorious battle, he received the castle of Naro and the territories of Canicatti and Ravanusa.

Early History of the Palmeronni family

This web page shows only a small excerpt of our Palmeronni research. More information is included under the topic Early Palmeronni History in all our PDF Extended History products and printed products wherever possible.

There are many variations of most of those Italian names that originated in the medieval era. Some of these come from regional differences, like the tradition of ending northern names in "o" and southern names in "i". Others come from inaccuracies in the recording process, which were extremely common in the eras before dictionaries standardized spelling. Some of the spelling variations of Palmeronni are Palmieri, Palmiero, Palmeri, Palmerio, Palmerini, Palmarini, Palmarino, Palmarìn and many more.

Prominent among members of the family was Riccardo Palmieri, elected Grand Chancellor of the Two Sicilies, and Bishop of Siracusa and Archbishop of Messina in 1183. Andrea-Matteo Palmieri was Archbishop of Acerenza and of Matera, and eventually became Cardinal; of the same family were Benedetto Palmieri, Archbishop of Salerno, and Leonardo Palmieri, Bishop of Molfetta in 1475. Fulco Palmeri was Baron of Naro and became a priest in...
Another 68 words (5 lines of text) are included under the topic Early Palmeronni Notables in all our PDF Extended History products and printed products wherever possible.

Migration of the Palmeronni family