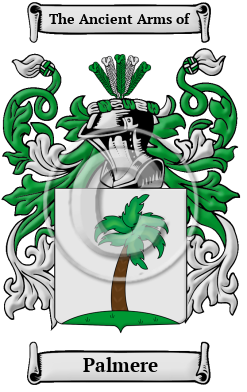 The German name Palmere arose from some distinct sources. In some instances, it evolved from the medieval personal name Palmatius, borne by a saint who died in 286. The name also derives from the Middle High German word "palme," or "balme," denoting a pussy willow, the tree that was traditionally used to provide the branches for Palm Sunday processions. In this instance, the name was likely originally used by someone who lived among such trees.

Early Origins of the Palmere family

The surname Palmere was first found in Bavaria, where the name Palm was anciently associated with the tribal conflicts of the area. They declared allegiances to many nobles and princes of early history, lending their influence in struggles for power and status within the region. They branched into many houses, and their contributions were sought by many leaders in their search for power.

Early History of the Palmere family

This web page shows only a small excerpt of our Palmere research. Another 138 words (10 lines of text) covering the years 1712, 1735, and 1783 are included under the topic Early Palmere History in all our PDF Extended History products and printed products wherever possible.

More information is included under the topic Early Palmere Notables in all our PDF Extended History products and printed products wherever possible.

Migration of the Palmere family

Some of the first settlers of this family name or some of its variants were: Johannes Palm (1713-1789), (anglicized John Palm), Bavarian doctor and soldier, who arrived in Philadelphia in 1749, founder of Palmyra, Pennsylvania.