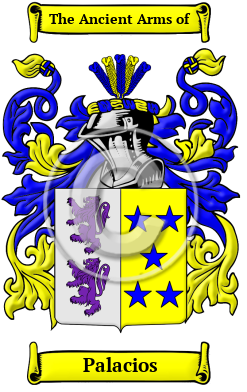 Many surnames were derived from notable geographic features in the vicinity of where the individuals lived. Palacios is derived from the Spanish word "palaciao," meaning a "palace," and as a surname, was no doubt taken on by someone who lived near a palace or mansion, or perhaps by someone who worked there.

Early Origins of the Palacios family

The surname Palacios was first found in Vizcaya, the ancient Basque country.

Early History of the Palacios family

This web page shows only a small excerpt of our Palacios research. Another 41 words (3 lines of text) covering the years 1541, 1650, and 1793 are included under the topic Early Palacios History in all our PDF Extended History products and printed products wherever possible.

Spelling variations of this family name include: Palacio, Palacios and others.

Prominent among bearers of the family name at this time was the Palacios family of Navarre, who were granted arms in 1541. Diego Palacios del Portal was...
Another 27 words (2 lines of text) are included under the topic Early Palacios Notables in all our PDF Extended History products and printed products wherever possible.

Palacios migration to the United States +

Palacios Settlers in United States in the 19th Century