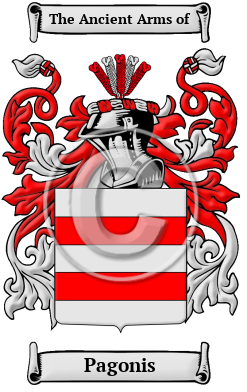 The Italian Pagonis surname is thought to derive from the personal name Pagano, from the Latin word "paganus," meaning "village dweller."

Early Origins of the Pagonis family

The surname Pagonis was first found in Naples, (Italian: Napoli, Latin: Neapolis) in 1119 when Ugone Pagano, was a prominent figure at that time.

Early History of the Pagonis family

This web page shows only a small excerpt of our Pagonis research. More information is included under the topic Early Pagonis History in all our PDF Extended History products and printed products wherever possible.

Surnames that originated in Italy are characterized by an enormous number of spelling variations. Some of these are derived from regional traditions and dialects. Northern names, for instance, often end in "o", while southern names tend to end in "i". Other variations come from the fact the medieval scribes tended to spell according to the sound of words, rather than any particular set of rules. The recorded variations of Pagonis include Pagani, Pagano, Pagan, Pagana, Paganelli, Paganetti, Paganetto, Paganini, Paganino, Paganin, Paganucci, Paganuzzi and many more.

Prominent among bearers of this surname in early times was Gregorio Pagani (1558-1605), Italian painter of the late Mannerist period, active mainly in Florence. He was the son of the painter Francesco Pagani; Pope Eugenio III, of the Paganelli family of Florence, who was elected in 1145; Federico Pagana, elected Doge of the Republic of Genoa in 1383; Simone Pagani was Bishop of Forlì from 1384 to 1391. From the Pagano family of Naples emerged many religious members: Giovanni, Cardinal in 1228; Nicol, Archbishop of Naples in 1399; Nicol Archbishop of Bari in 1400; Giovanni, Bishop of Nicastro in 1431; Vincenzo...
Another 135 words (10 lines of text) are included under the topic Early Pagonis Notables in all our PDF Extended History products and printed products wherever possible.

Migration of the Pagonis family