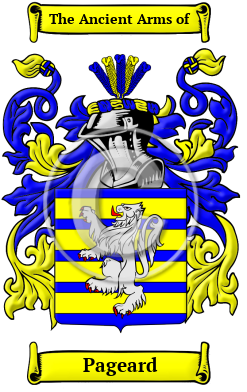 During that dark period of history known as the Middle Ages, the name of Pageard was first used in France. While the patronymic and metronymic surnames, which are derived from the name of the father and mother respectively, are the most common form of a hereditary surname in France, occupational surnames also emerged during the late Middle Ages. Many people, such as the Pageard family, adopted the name of their occupation as their surname. However, an occupational name did not become a hereditary surname until the office or type of employment became hereditary. The surname Pageard was an occupational name for a young servant to a nobleman who was in the first stage of training for knighthood. Such a servant was known in Old French as a page.

Early Origins of the Pageard family

The surname Pageard was first found in Dauphiny (French: Dauphiné or Dauphiné Viennois), a former province in southeastern France, where the family was anciently seated in a parish, in the department of Isère, in the district of Vienne.

Several members of this distinguished family became well-known. Gui Pageau, a poet from Le Mans, published a volume of "Cantiques" and "Noëls" in 1584. Margarit Pageau was also a poet; he was born in Vendôme during the 16th century. He published his work, "Oeuvres poétiques." Louis-Léon Pajot, Count of Onsembray, was born in Paris in 1678. He took the philosophy of Descartes and wrote several works on this subject. After the death of his father, he inherited a country estate in Bercy. He died in 1753.

Early History of the Pageard family

Notable amongst the family at this time was Louis Pajot, who was born in Paris, and who died in 1798. He was a drummer in a battalion of French volunteers. Pierre-François Page was...
Another 33 words (2 lines of text) are included under the topic Early Pageard Notables in all our PDF Extended History products and printed products wherever possible.

Migration of the Pageard family

Some of the first settlers of this family name or some of its variants were: Joane Page, who settled in Virginia in 1670; David Paget, who settled in Maryland, with his wife, Maudlin, and his children, in 1711; François Pagé.