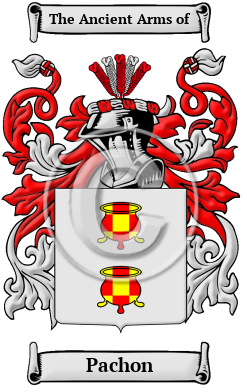 The prestigious surname Pachon originated in Spain, a country which has figured prominently in world affairs for hundreds of years. The name Pachon became a hereditary surname in Spain after it was brought from Portugal. This ancient surname dates back to Roman times and in 92 BC, a Roman general named Vivio Pacieco, who descended from Lucio Viminio Pacieco, served Julius Caesar in Andalucía. One of Vivio's descendants, Don Diego López Pacheco, who was also known as "el Grande" and was Ricohombre of Portugal, was the first bearer of this name in Spain.

Early Origins of the Pachon family

The surname Pachon was first found in Castile, prominent among the Christian kingdoms of medieval Spain.

Early History of the Pachon family

Spelling variations of this family name include: Pacheco, Pachico, Pachón, Pachon and others.

Pachon migration to the United States +

Pachon Settlers in United States in the 19th Century

Pachon Settlers in United States in the 20th Century