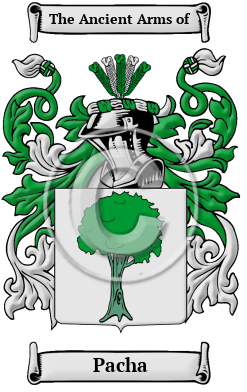 The surname Pacha evolved from the Latin word "pax," which means "peace." The surname was likely originally a nickname for a person who was of a peaceful nature, or who sought peace in the figure of Christ.

Early Origins of the Pacha family

The surname Pacha was first found in with Negusante Paci, who arrived in Italy with Emperor Federico I and settled in Bologna.

Early History of the Pacha family

This web page shows only a small excerpt of our Pacha research. More information is included under the topic Early Pacha History in all our PDF Extended History products and printed products wherever possible.

Surnames that originated in Italy are characterized by an enormous number of spelling variations. Some of these are derived from regional traditions and dialects. Northern names, for instance, often end in "o", while southern names tend to end in "i". Other variations come from the fact the medieval scribes tended to spell according to the sound of words, rather than any particular set of rules. The recorded variations of Pacha include Paci, Pace, Pasi, Pase, Pasio, Pacelli, Pacella, Paciello, Pacilli, Pacetti, Pacitto, Pacini, Pacino, Pacinotti, Paciotti, Paciullo, Pacenti, Paselli, Pasello, Pasetti, Pasetto, Pasini, Pasino, Pasin, Pasinetti, Pasinati, Pasinato, Pasoli, Pasolini, Pasolli, Pasotti, Pasotto, Pasutti, Pasutti, Pacioli, Pacchiarotti, Pacho and many more.

Prominent among members of the family was Luca Pacioli, a mathematician in Venice in 1445; Iacopo Pacchiarotti was a painter in Siena at this time. Asprilio Pacelli was a church musician in Umbria, and moved to Rome where he became choirmaster. In 1603 he was appointed musical director of King Sigismund II at the Royal Chapel in Warsaw, Poland. Pietro Paolo Paciotti was a 16th century choirmaster in Rome and was also a composer of masses, madrigals, and motets. Salvadore Pacini was mayor of Piacenza in 1545 and...
Another 87 words (6 lines of text) are included under the topic Early Pacha Notables in all our PDF Extended History products and printed products wherever possible.

Pacha migration to the United States +

An examination into the immigration and passenger lists has discovered a number of people bearing the name Pacha:

Pacha Settlers in United States in the 19th Century