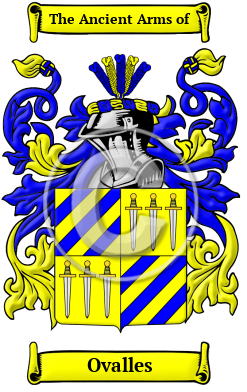 The surname Ovalles is the name of an illustrious and noble family originally from Galicia., whose origins are so ancient that the early genealogy has been lost in time. Etymologically, the word "ovalle" comes from the Latin "vallis" meaning "valley." The original bearer of this name was known by the members of his community as one who came from the valley.

Early Origins of the Ovalles family

The surname Ovalles was first found in the province of Pontevedra in the autonomous northern region of Galicia.

Early History of the Ovalles family

This web page shows only a small excerpt of our Ovalles research. Another 119 words (8 lines of text) covering the year 1524 is included under the topic Early Ovalles History in all our PDF Extended History products and printed products wherever possible.

Spelling variations of this family name include: Ovalles, Ovalle and others.

Migration of the Ovalles family

Some of the first settlers of this family name or some of its variants were: Alvaro de Ovalle who arrived with his wife Maria de Villanueva in Cuba in 1580 with 5 children; and Nicolas De Ovalle who settled in Peru in 1577.