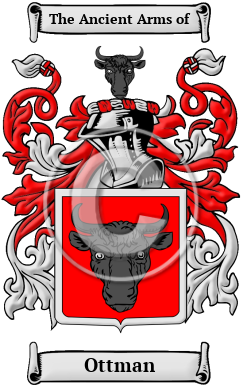 The German state of Prussia, which reached the zenith of its power in the late 19th century, is the glorious birthplace of the distinguished surname Ottman. In the medieval era, after the fall of the Roman Empire, the German lands were inhabited by a variety of Barbarian tribes. The borders of the Barbarian kingdoms changed frequently, but the region that became known in Prussia was roughly divided between the areas of Brandenburg-Prussia, West Prussia, and East Prussia. The colorful history of Brandenburg-Prussia, provides a glimpse at the oldest origins of the Ottman family.

Early Origins of the Ottman family

The surname Ottman was first found in Prussia, where the name Otto was anciently associated with the tribal conflicts of the area. They declared allegiances to many nobles and princes of early history, lending their influence in struggles for power and status within the region. They branched into many houses, and their contributions were sought by many leaders in their search for power.

Early History of the Ottman family

Notable figures of the period with the name Ottman were Otto of Nordheim (d. 1083), the Duke of Bavaria, who led the Saxon forces against king Henry IV following the excommunication of the German monarch (1076); Georg Otto (1550-1618), a German composer of sacred works, was Hofkapellmeister to...
Another 48 words (3 lines of text) are included under the topic Early Ottman Notables in all our PDF Extended History products and printed products wherever possible.

Ottman migration to the United States +

Ottman Settlers in United States in the 18th Century

Ottman Settlers in United States in the 19th Century

Ottman Settlers in United States in the 20th Century