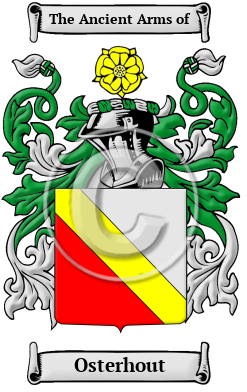 The surname Osterhout is of uncertain origin, but there are several possibilities for its source. It may have derived from the Gothic word "ostan" meaning "the direction of the rising sun," and may have been initially born by someone from the east. Alternatively, Osterhout may have come from the Middle High German word "Oster," meaning "Easter," and the name would have likely belonged to someone born or baptized during the festival of Easter. Oster is an element in many compound names, such as Osterbrock, Osterfeld, and Osterkamp.

Early Origins of the Osterhout family

The surname Osterhout was first found in Saxony. The earliest record of this surname dates back to the twelfth century when one Fridericus Osterman was recorded in 1150. In 1159, Gerardus Osterman was a citizen of Cologne. Lippold von der Oesten was recorded in 1254, and Hinricus de Osten appeared in 1302. Radeke Osterlo was listed in 1423, Berchtold Österli in Oberhausen, Wurttemberg in 1485, and Jurgen Ostermann in Goettingen in 1563. Veit Ostermann was a citizen of Passau in 1623 and in 1680, Matthias Ostermann was residing in Erding. Michael Ahasverus Ostermaier served as mayor of the town of Ratzeburg in the seventeenth century, and his son Johann (1678-1733) was a pastor in Crumesse.

Early History of the Osterhout family

Another 36 words (3 lines of text) are included under the topic Early Osterhout Notables in all our PDF Extended History products and printed products wherever possible.

In the United States, the name Osterhout is the 17,627th most popular surname with an estimated 2,487 people with that name. [1]

Osterhout migration to the United States +

Osterhout Settlers in United States in the 17th Century

Osterhout Settlers in Canada in the 18th Century

Osterhout Settlers in Canada in the 19th Century