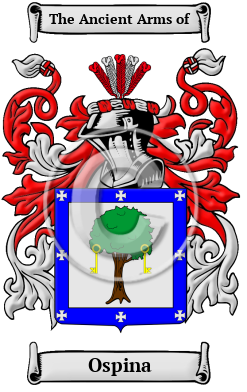 Noble surnames, such as Ospina, evoke images of the ancient homeland of the Spanish people. The Ospina family name is derived from one of several places named Espinosa, found in a number of Spanish regions including Galicia and Vascongadas. The place-name Espinosa is derived from the word "espino," which means "hawthorn" and thus, the first bearer of this surname likely lived near a place where this tree grew in abundance.

Early Origins of the Ospina family

The surname Ospina was first found in Castile, an important Christian kingdom of medieval Spain.

Early History of the Ospina family

Spelling variations of this family name include: Espinosa, Espinoso, Espinoza, Espinozo, Espina and many more.

In the United States, the name Ospina is the 13,963rd most popular surname with an estimated 2,487 people with that name. [1]

Migration of the Ospina family

Some of the first settlers of this family name or some of its variants were: Gaspar de Espinosa (died 1537), an administrator in Hispaniola and in Peru. Other migrants include Antón de Espinosa, who sailed to America in 1514.