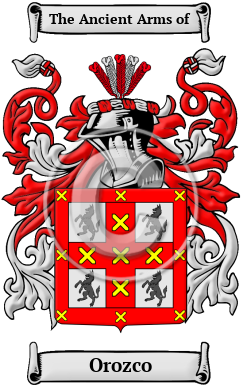 The Orozco surname is a habitational name derived from the place name Orozco in Bilbao in the Basque region, in the province of Biscay.

Early Origins of the Orozco family

The surname Orozco was first found in the Basque region, in the northern Iberian peninsula.

Early History of the Orozco family

This web page shows only a small excerpt of our Orozco research. Another 134 words (10 lines of text) covering the years 1352, 1630 and 1705 are included under the topic Early Orozco History in all our PDF Extended History products and printed products wherever possible.

Spelling variations of this family name include: Orozco, Oroz, Orosco, Orozqueta and others.

Prominent among bearers of the family name at this time was Alonso de Orozco, a mystic writer of the sixteenth century, author of "Historia de la Reina Sabá"; sixteenth century sculptor Juan Orozco...
Another 33 words (2 lines of text) are included under the topic Early Orozco Notables in all our PDF Extended History products and printed products wherever possible.

In the United States, the name Orozco is the 1,089th most popular surname with an estimated 27,357 people with that name. [1]

Orozco migration to the United States +

Orozco Settlers in United States in the 16th Century

Orozco Settlers in United States in the 19th Century