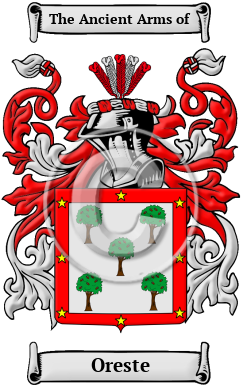 Early Origins of the Oreste family

The surname Oreste was first found in the Basque region of northern Spain.

Early History of the Oreste family

This web page shows only a small excerpt of our Oreste research. Another 286 words (20 lines of text) covering the years 1908, 1645, 1650 and 1645 are included under the topic Early Oreste History in all our PDF Extended History products and printed products wherever possible.

Spelling variations of this family name include: Arestegui, Arostegui, Orestegui, Aresti, Areste, Oresti and many more.

Prominent among bearers of the family name at this time was Giovanni Battista Aresti de Dovara, O.P., a Roman Catholic prelate who served as Archbishop of Aleppo (1645-1650.) He...
Another 28 words (2 lines of text) are included under the topic Early Oreste Notables in all our PDF Extended History products and printed products wherever possible.

Migration of the Oreste family

Some of the first settlers of this family name or some of its variants were: Joseph Aresteguieta, who arrived at the port of Philadelphia in 1804.