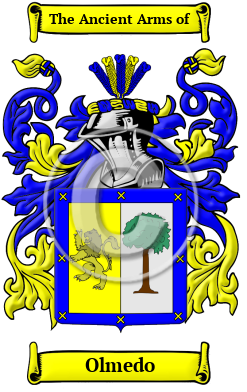 The noble Spanish surname Olmedo is of locative origin, being derived from the topographic or man made feature where the initial bearer resided. In this case, Olmedo derives from the Castilian element "olmeda," in turn derived from a contraction of "olmo" meaning "elm tree," plus the suffix "eda," meaning "abundance." Thus, the surname Olmedo was used to identify a person who lived in a place where many elm trees grew.

Early Origins of the Olmedo family

The surname Olmedo was first found in the Spanish province of Valladolid, in the Castilla la Vieja.

Early History of the Olmedo family

This web page shows only a small excerpt of our Olmedo research. Another 84 words (6 lines of text) are included under the topic Early Olmedo History in all our PDF Extended History products and printed products wherever possible.

Spelling variations of this family name include: Olmeda, Olmedo, Olmera, Olmo and others.

More information is included under the topic Early Olmedo Notables in all our PDF Extended History products and printed products wherever possible.

Olmedo migration to the United States +

Olmedo Settlers in United States in the 19th Century