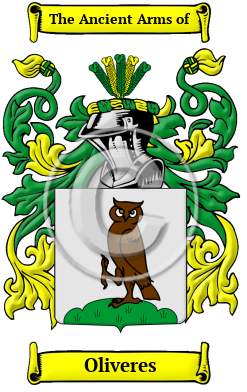 Early Origins of the Oliveres family

The surname Oliveres was first found in Aragon, an important Christian kingdom of medieval Spain. Today, Olivares is a city in the province of Seville having a population of 8,729 inhabitants as of 2005.

Early History of the Oliveres family

Another 32 words (2 lines of text) are included under the topic Early Oliveres Notables in all our PDF Extended History products and printed products wherever possible.

Migration of the Oliveres family

Some of the first settlers of this family name or some of its variants were: conquistador Gabriel de Olivares, who received a Grant of Arms from King Charles I in 1536; in recognition of his services to the Crown. Other early migrants to the New World included Domingo de Oliveros, who sailed to America in 1510.