The Odicino surname was created from the Germanic personal name Odo, or Otto. Oddi, is patronymic or plural form of the surname.

Early Origins of the Odicino family

The surname Odicino was first found in Perugia (Latin: Perusia), the capital city of the region of Umbria in central Italy, crossed by the Tiber River, capital of the province of Perugia. Perusia took part in a rebellion in 295 B.C. and was reduced with the exceptions of the temples Vulcan and Juno. In the 9th century A.D the city was a papal territory but remained true to the Guelphs. Records are found in 1280, when Oddo Oddi was mayor of Parma. From this family came two more mayors in Parma: Ungaro in 1291 and Marolo in 1293. To be recorded at this time, at the beginning of recorded history, was of itself a great distinction and indicative of noble ancestry.

Early History of the Odicino family

Prominent among members of the family was Roberto Oderisi, a Neapolitan painter who lived during the 14th century. He worked for King Roberto of Naples and King Charles III, and among surviving works are numerous frescoes in the Church of Santa Maria Incoronata in Naples. Oddo degli Oddi was a physician from Padua around 1450; Sforza degli Oddi, born in 1540, was a Perugian writer and jurist; Marco degli Oddi, born in Padua in 1526, was a professor of logic, philosophy, and medicine. Many members of the Oddone family gained prestige...
Another 90 words (6 lines of text) are included under the topic Early Odicino Notables in all our PDF Extended History products and printed products wherever possible.

Odicino migration to the United States +

Odicino Settlers in United States in the 20th Century 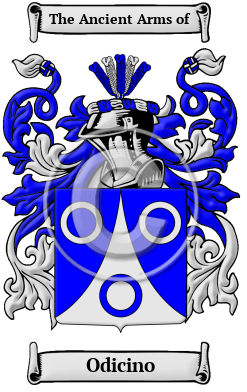