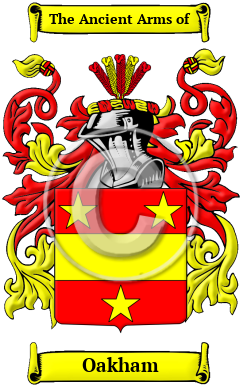 Early Origins of the Oakham family

The surname Oakham was first found in Devon in the parish of South Tawton at Oxenham, famous for 'the Oxenham omen.'

"Oxenham gave name to a family of repute, one of whose members was John Oxenham, of Plymouth, the first Englishman who sailed on the Pacific, a comrade of Drake at Nombre de Dios, who eventually fell into the hands of the Spaniards and was by them executed as a pirate one of the bravest and most unfortunate of the great seamen of Elizabethan Devon. The ' omen ' consists in the appearance of a ' bird with a white breast,' or of a white bird, before the deaths of members of the family. The earliest record of this apparition refers to the year 1618 ; but in 1641 what is now a rare pamphlet was published, detailing four appearances before the deaths of four members of a branch of the Oxenhams, settled at Zeal Monachorum, in 1635. "

"The tradition continues in the family, where the reality of the appearances is not doubted, though 'no decided conviction obtains as to their cause.' Recent instances of the ' omen ' are quoted in connection, the most remarkable of which was the appearance of a white bird outside the windows of a house in Kensington a week before the death of Mr. G. N. Oxenham, then head of the family, in 1873. The bird refused for some minutes to be driven away, and a sound like the fluttering of wings is stated to have been heard in the bedroom. Probably this belief in the white bird of the Oxenhams is associated in some way with the wide-spread superstition that the flying of birds around a house and tapping against the window, or resting on the sill, portends death." [1]

Early History of the Oakham family

This web page shows only a small excerpt of our Oakham research. Another 186 words (13 lines of text) covering the years 1242, 1814 and 1642 are included under the topic Early Oakham History in all our PDF Extended History products and printed products wherever possible.

More information is included under the topic Early Oakham Notables in all our PDF Extended History products and printed products wherever possible.

Oakham Settlers in Australia in the 19th Century