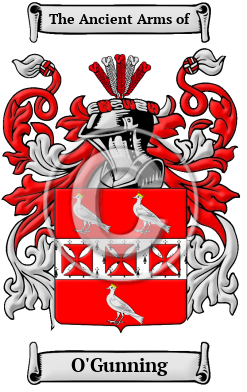 The O'Gunning surname is an Anglicization of the Gaelic Ó Conaing or "descendant of Conaing," a Gaelic personal name. The Castleconnell (the Castle of Connell) is said to be a mistranslation and should in fact be the Castle Gunning.

Early Origins of the O'Gunning family

The surname O'Gunning was first found in at Castleconnell, where they were a Sept of the Ui Bloid, and were said to be descended from a brother of Brian Boru. The village of Castleconnell, took its name from the castle, which was built on a rock outcrop overlooking the Shannon river, where it separates County Clare from Tipperary.

The Annals of Loch Cé list and Edmund O'Conaing as the "royal heir of Munster" in 1032; and Domhnall O'Conaing (d. 1137) as "chief Bishop of Leath Mogha." Other early records include Dermot O'Conaing (d. 1195), Bishop of Killaloe, and Peter O'Conyng, who was Abbot of Holy Cross in 1297.

Early History of the O'Gunning family

This web page shows only a small excerpt of our O'Gunning research. Another 71 words (5 lines of text) covering the years 1734, 1790, 1733 and 1760 are included under the topic Early O'Gunning History in all our PDF Extended History products and printed products wherever possible.

Spelling variations of this family name include: Gunning, O'Gunning, Gunnin, O'Conaing and others.

Another 32 words (2 lines of text) are included under the topic Early O'Gunning Notables in all our PDF Extended History products and printed products wherever possible.

Migration of the O'Gunning family

Some of the first settlers of this family name or some of its variants were: Francis Gunning, a Church of England Minister, who arrived in Jamaica in 1720; Robert Gunning, who arrived in Charles Town [Charleston], South Carolina in 1822.