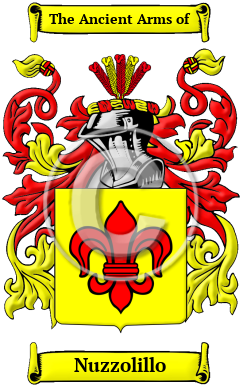 Early Origins of the Nuzzolillo family

The surname Nuzzolillo was first found in Tuscany (Italian: Toscana), a region in central Italy. It has nine provinces. Universities are Florence, Pisa and Siena. Home of the Medici they returned to Tuscany in 1530 where they held until 1737. Francis was elected emperor in 1745 and Leopold I succeeded, down to Ferdinand III in 1793. In 1799 it was sacked by a French revolutionary force and remained French until 1847. In 1861 it joined the Kingdom of Italy. In those ancient times only persons of rank, the podesta, clergy, city officials, army officers, artists, landowners were entered into the records. To be recorded at this time, at the beginning of recorded history, was of itself a great distinction and indicative of noble ancestry.

Early History of the Nuzzolillo family

This web page shows only a small excerpt of our Nuzzolillo research. Another 117 words (8 lines of text) covering the years 1270, 1552, 1629, 1515, 1587, 1603 and 1673 are included under the topic Early Nuzzolillo History in all our PDF Extended History products and printed products wherever possible.

Another 48 words (3 lines of text) are included under the topic Early Nuzzolillo Notables in all our PDF Extended History products and printed products wherever possible.

Migration of the Nuzzolillo family

Some of the first settlers of this family name or some of its variants were: Antonio Nucci, who settled in New York sometime between 1884 and 1915; and Narciso Nucci, who arrived in Illinois in 1888.